ENDS IN
HOURS
:
MIN
:
SEC
Save 40%
Fall into Savings SALE

Stained glass windows can be found in many places around the world. Throughout the centuries, these artworks have been adding beauty to spaces all around the world, most commonly churches and other religious structures. But some pieces clearly elevate this art form to a whole new level. Here, then, are some of the most famous works of stained glass in the world. 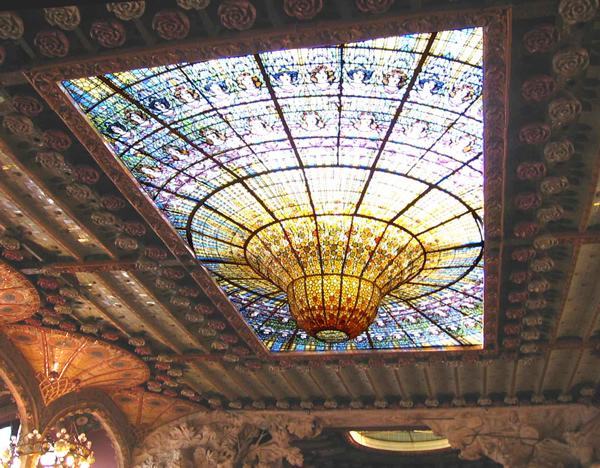 
Symbolizing the sun and sky, the skylight of the Palau de la Música Catalana is a three-dimensional masterpiece that is accented by the stained-glass windows set in arches that line both sides of the main concert hall. The skylight drops away from the ceiling in an inverted bell and is deeply pigmented in shades of gold and blue.


The Grossmunster is a Protestant cathedral that dates back to 1220. Its stained-glass windows were designed by Swiss artist Augusto Giocometti and installed in 1932. Between 2006 and 2009, 12 more windows were added by Sigmar Polk. Instead of glass, seven of the windows are made of thinly sliced, artificially colored agate.


The Guinness Book of World Records lists this mausoleum as the largest single stained-glass installation in the world. Designed by Pickel Studio, the window is made of more than 22,000 square feet of colored, faceted glass and is made of 2,448 individual panels.

8. The Windows of Sainte-Chapelle (Paris, France)


This medieval Gothic cathedral houses the largest collection of 13th century stained glass in the world. Done in shades of red and blue, they contain 1,130 illustrations of biblical figures. The painted walls of the cathedral are reduced to a frame for the 6,458 square feet of colorful glass.


The largest church in the Czech Republic, St. Vitus is a Gothic cathedral founded in 1344 and officially completed in 1929. The richly colored stained-glass windows of the cathedral all date to the 20th century and were made by prominent Czech artists, including Alphonse Mucha.

6. The Domes of the Chicago Cultural Center (Chicago, IL)


The Chicago Cultural Center contains two impressive stained-glass domes. The most famous is the 38-foot Tiffany dome that tops the Preston Bradley Hall and is believed to be the largest Tiffany dome in the world. Less famous, but no less beautiful, is the Victorian Healy-Millet ceiling in the Grand Army of the Republic Hall.


The exterior of the Netherlands Institute for Sound and Vision is covered in stained-glass panels that each show an iconic moment from Dutch television. The images are skewed so that they are discernible only at certain angles. The overall affect is a dream-like exploration of visual history.


Built in 1962 to replace the St. Michael's Cathedral destroyed in World War II, Coventry Cathedral is a modernist masterpiece. The 195-panel baptistery window was designed by John Piper. For those hoping to see what the stained glass of the original cathedral looked like, several panels were removed prior to the bombing and are on display in the new cathedral.


Also known as the Rio de Janeiro Cathedral, the Metropolitan Cathedral of Saint Sebastian serves as the seat of the archdiocese of Rio. Completed in 1974, the building has four rectilinear, 210-foot-tall stained-glass windows that stretch from floor to ceiling.


The Sultan Ahmet Mosque is one of the last mosques built during the classical period and incorporates both Islamic and Byzantine architectural elements. It became known as the Blue Mosque because of the blue paint used in subsequent restorations. The mosque has more than 200 stained-glass windows in shades ranging from palest blue to indigo that bathe the interior in color and light.


The stained-glass windows of Chartres Cathedral are considered by many to be the most beautiful in the world. The church itself is a UNESCO World Heritage site and one of the best-preserved examples of French Gothic architecture. Many of the windows date back to the first half of the 13th century, and it is believed that 152 of the building's original 176 windows have survived. The dense glass is heavily pigmented and adds rich color to the cathedral's interior.

How to Measure Window Blinds for Bay Windows
When measuring window blinds for bay windows, you will need calculate the intersecting points of the blinds to determine the width of each piece. The first step is to select a window shade noting that different types of shades will have different depths. Once you have selected the blinds or shades, you will be able to get the depth you need to calculate the intersection point. See the product specifications for exact depths.... more

Blinds for Large Windows - Mount More Than One Blind in the Same Window
For larger windows, horizontal blinds cannot be manufactured as one blind with a single headrail due to the weight of the blinds. In cases like this there are two options for measuring and installing horizontal blinds.... more

Window Treatment Solutions for Seniors
Looking for window treatment solutions for seniors? Some blinds and shades are heavy, difficult to operate or have thin cords that can be problematic to grip. However, there are window treatments out there that provide ease of use. As people age, some may suffer from arthritis and other age related conditions. Opening and closing blinds shouldn’t be difficult for anyone of any age. As such, we have compiled a list of window treatments that are easy to operate, lightweight and still stylish.... more

How Wood Blinds and Mini Blinds Help Relieve Allergies
Allergy season is in full swing. In the mountains, Cottonwood trees and flowers are blooming and in the country, tall grasses and flowers are swaying in the wind, releasing allergy triggers. For those with bad allergies, the spring and summer can become a time of suffering. However, knowing how to furnish a home can help relieve allergy symptoms indoors.... more

Security Blinds and Shades for Your Windows
Security blinds are important and studies show window blinds can play a major role in home security. According the the FBI, in 2005, law enforcement agencies reported an estimated 2,154,126 burglary offenses. That is almost 6000 burglaries per day and over 4 burglaries per second (based on FBI 2005 crime report). ... more